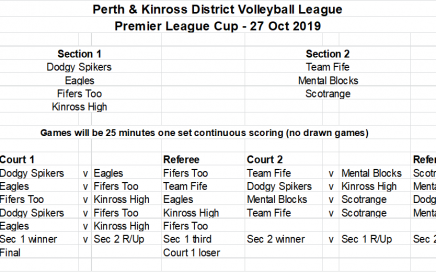 Fixtures for Premier League Cup to be played at Bell’s Sports Centre on Sunday 27th October 2019:

The Perth & District Volleyball League kicked off the new season with the Recreational League Cup competition at Bell’s Sports Centre on Sunday night. The nine teams were split into three sections of three teams with the top team in each section qualifying along with the best runner up. Stuart […]